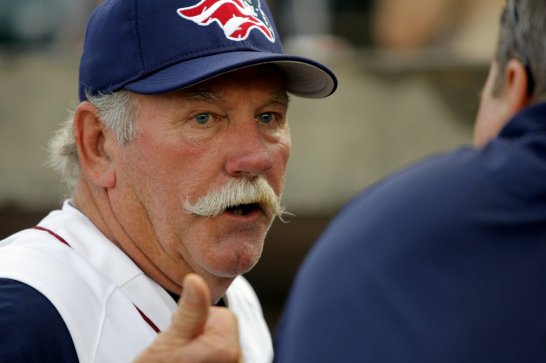 Happy 71st Birthday to Sparky, my friend and teammate and the best relief pitcher I ever played with.   When the Yankees traded Danny Cater to the Red Sox for Sparky in March of 1972, it changed my life for the better.  We hit it off immediately and had lots of fun together.  Jim Turner, the Yankees pitching coach, once called our group “The Nursery” because of all the childish pranks we pulled, and we wore that as a badge of honor.  I enjoyed every minute I played with The Count, and one of the reasons is that our team got significantly better because of his arrival.

I remember Sparky’s Pinstripe debut on April 19, 1972.   We were ahead of the Brewers 3-0 in the top of the ninth. Mike Kekich had given up just two hits when Ron Theobold hit a two-out single, followed by John Briggs’ Home Run.  Ralph Houk brought in The Count to pitch to George Scott, who grounded out on the second pitch.  The first time he came to my rescue was on May 21, against the Red Sox at Yankee Stadium.   I was off to a miserable start and was 0-6 so far that season.   I went in to the top of the ninth with a 6-1 lead, and quickly have up successive singles to Duane Josephson, Rico Petrocelli and Phil Gagliano.  With the bases loaded and two out, The Major brought The Count in to pitch, and I got my first win of the year.

Another memorable game from early in The Count’s Yankee career came in his second appearance for us, against the Oakland A’s on April 25, 1972.  It was a pitcher’s duel between Sparky and Rollie Fingers.  Steve Kline and Catfish Hunter were the starters and the game was tied 3-3 going into the ninth inning.  Sparky had a 1-2-3 inning, followed by Rollie walking Rich McKinney and facing four batters.  Sparky had a 1-2-3 tenth; Rollie had a little more trouble.  He gave up a two-out walk to Bobby Murcer, who moved to second on Roy White’ single and got stranded there when Rollie got Felipe Alou out.  In the eleventh, gave up a one-out hit to Joe Rudi and walked Reggie Jackson – then he struck out Sal Bando and Mike Epstein.   With two outs in the bottom of the eleventh, The Major sent Ron Blomberg to the plate to pinch hit for Sparky.  Bloomie walked, but then Rollie got Jerry Kenney out to end the inning. Mike Hegan hit an RBI double off Lindy McDaniel in the top of the twelfth, and Rollie had a 1-2-3 inning to get the win.  It didn’t take long for our team to understand that the Era of Lindy McDaniel was over and there was a new fireman in town.   One of my greatest regrets was that I wasn’t around for Sparky’s Cy Young season.

One of the benefits of the Horace Clarke Era was that the Yankees got to pick early in the Amateur Draft.  I was in my third season as a Yankees pitcher in 1968 when they had the #4 overall pick.  It was a talented pool of prospects, with many first round picks making it to the major leagues.  Three teams had a chance to beat out the Yankees to grab Thurman Munson: the Mets (#1 pick), who took Tim Foli instead; the A’s (#2 pick), who went with Pete Broberg; and the Astros (#3 pick), whose choice was a catcher named Martin Cott, who played three seasons in the minor leagues and was then, for reasons I do not know, out of baseball.

For extreme trivia buffs, other Munson First Round ’68 teammates: Bobby Valentine (#5, by the Dodgers); Greg Luzinski (#11, by the Phillies); future Yankee Rich McKinney (#14, by the White Sox); and Gary Matthews (#17, by the Giants).

A little Celerino Sanchez trivia: Chief came to the Yankees in an unusual trade between a MLB team and a club in the Mexican League. The process started in 1969 when the Yankees traded Al Downing and Frank Fernandez to the Oakland A’s for Danny Cater and an obscure guy named Ossie Chavarria, a Panama-born career minor leaguer (1959-1973) who hit .208 in 124 games for the Kansas City Athletics during parts of 1966 and 1967. (Footnote: he hit .222 against me in four games my rookie year.) Ossie never got his pinstripes: he played all the infield positions for the Syracuse Chiefs, batted in the .250-.270 range, but the competition was tough in those days – the Yankees had Horace Clarke, Gene Michael, Jerry Kenney, Frank Baker and Ron Hansen ahead of him. The Yankees were in the market for a new third baseman, and the scouts had identified Chief as a potential star. So after the 1971 season, the Yankees traded Ossie to the Mexico City Tigers in the Mexican League for Chief. Chief, of course, didn’t pan out, and he returned to the Mexican League in time for the 1974 season. Sadly, Chief died young, of a heart attack in 1992 at age 48. But for some reason – likely his name and his role as the transitional third baseman between Jerry Kenney/Rich McKinney and Graig Nettles – he is well remembered by the Yankee fans of the Horace Clarke Era. 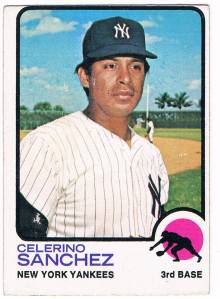 Chief hit his only career Home Run at Yankee Stadium on May 12, 1973 off of Baltimore’s Mickey Scott. He was a pinch hitter for the pinch hitter for the designated hitter. Jim Ray Hart started the game against Mike Cuellar, and Ron Bloomberg pinch hit for him when Bob Reynolds came in relief. When Earl Weaver replaced Reynolds with Scott, Ralph Houk sent Chief up. With Bobby Murcer on first, Sanchez hit a shot to left; Al Bumbry tried to grab it, but he could not. That was a great win because we were tied with Baltimore for second on that particular day. Yankees blanked the Orioles 8-0; rookie Doc Medich got the win.

Chief went hitless in his first two major league games; his first hit came at Yankee Stadium, off Mike Paul of the Texas Rangers. It was a two-out hit to left, with an RBI; Roy White scored. His last hit came in his final game as a New York Yankee, and as a major league baseball player. It was the final game of the 1973 season; I was on the mound against Detroit. He came in to the game as a seventh inning replacement for Graig Nettles; facing Fred Holdsworth, he hit a two-out, two-run single to center, driving in Otto Velez and Hal Lanier. And Chief could never touch Wilbur Wood; nine At-Bats in 1972 and 1973, he hit .000 off him.

Happy Birthday to Hall of Famer Goose Gossage, one of the greatest closers in the history of baseball.  I never got to play with Goose on the Yankees, and as a starting pitcher that was my loss.  No disrespect to Lindy McDaniel, but history would be treating me just a little better if I had Goose on my side.  The guy was incredible.  Goose’s rookie year was Sparky Lyle’s first in pinstripes.  They went up against each other on two consecutive days.

Goose’s first game against the Yankees was during his rookie season of 1972.  The Yankees were in Chicago and this was the first time Goose was facing us. The date was June 3, 1972.   It started as a matchup between Stan Bahnsen, who had been dealt to Chicago in that crappy-for-us Rich McKinney deal, and Freddie Beene.   This was one of the highest scoring games I can remember – we won 18-10.  Goose entered the game at the start of the seventh, and the Yankees were losing 10-8.  He was impressive – a 1-2-3 inning, getting Ron Bloomberg, Thurman Munson and Jerry Kenney out.  And he was just as impressive in the eighth, getting Bernie Allen, Felipe Alou and Horace Clarke out – another 1-2-3 inning.

So Goose comes out for the top of the ninth, protecting a 10-8 lead.  He gave up singles to the first three batters: Rusty Torres, Bobby Murcer and Roy White, who drove in Rusty.  10-9, runners at first and second, no outs, and Bloomie is up.  Chuck Tanner pulled Goose for Steve Kealy, who gave up an RBI single.   The score remained tied until the top of the 13th, when the Yankees had an extraordinary inning:  Thurman Munson and Bobby Murcer both hit a three-run homers: The other RBI’s came from two unlikely sources: Horace Clarke and Sparky, who drove in a run with a beautiful double to left.  Sparky pitched five innings, holding the Chisox to just three hits for the win.

The next day, Goose came in to relieve Dave Lemonds in the sixth inning.  The White Sox were ahead 2-1, but Lemonds got in some trouble.  With runners on first and second, Roy White hit an RBI single to tie the game.  Tanner pulled Lemonds and Goose got Felipe to hit into a double play.  But with Bobby on third, Goose threw a wild pitch and the Yankees were now up 3-2.  In the seventh, Goose faced an unusual offensive threat: Hal Lanier, who singled to right, stole second, and go to third of another wild pitch.  Then Gene Michael laid down an absolutely beautiful bunt and Hal scored.

The White Sox came up in the bottom of the ninth, and the Yankees starter – some guy named Kekich – was three outs away from a complete game.  With one out, he walked Bill Melton and then gave up a hit to Mike Andrews.  With runners on first and second, Ralph Houk pulled Mike and brought in Sparky to close.  Then Tanner put Jorge Orta in to run for Andrews, and pulled the next batter, shortstop Rich Morales, for a pinch hitter, Dick Allen.  Allen belted a Home Run over the left field fence.  The White Sox won, 5-3, and another rookie, Cy Acosta, got the win.