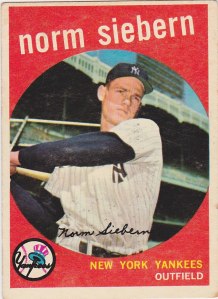 Happy Birthday to Norm Siebern, a former New York Yankee, who played major league baseball from 1956 to 1968.  Norm came up through the Yankee organization and was part of a trade that would have historic significance to the Yankees and to the game of baseball.  After the 1959 season, the Yankees traded Siebern, Hank Bauer, Don Larsen and Marvelous Marv Throneberry to the Kansas City Athletics for Roger Maris, Joe DeMaestri and Kent Hadley.   Norm later played for the Orioles, Giants, Angels and Red Sox.  He has two World Series rings –with the Yankees (1956 and 1957) – and played in the 1967 World Series with the Red Sox.   I faced Norm for the first time during my rookie season.  It was May 7, 1966 and we were playing the Angels at Anaheim Stadium.  Marcelino Lopez was pitching for California and Norm was at First Base.  I’ll never forget it; I had been in the majors for about three weeks, and I was pitching really, really well.  In the first four innings, I retired the first twelve batters.  Yes, I was pitching a perfect game.  Then in the fifth, Rick Reichardt hit a leadoff triple to Mickey Mantle in center. I got Jackie Warner out.  Then Norm comes up to bat and hit single to left, scoring Rick.  I threw a complete game and got the win, and Norm drove I the only run California scored that day.