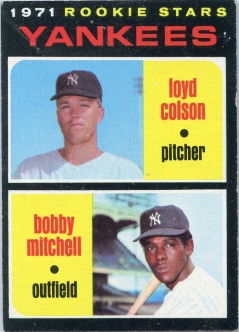 Loyd Colson was drafted by the Yankees in 1967, their first pick in the 28th round.  Of the 77 players the Yankees drafted that day, only five ever wore the pinstripes, and Loyd was one of them.  Just making it to the major leagues is an extraordinarily tough task, and while Loyd’s career was short, he still made it. I’m sure he will never forget the thrill of standing on the mound at Yankee Stadium, and while he never made it back, our team was honored to have him there and grateful for his strong showing that day.  So today’s installment of Monument Monday is dedicated to all the young players who made it to the major leagues, even if for only a short time, and I want to recognize their monumental achievements.

I met Loyd for the first time in February of 1970, when pitchers and catchers reported to spring training in Fort Lauderdale.  He was one of nine new guys on the 40-man roster that the Yankees viewed as integral to regaining their past glory.  The others were (if I remember this correctly) pitchers Larry Gowell (who had 217 strikeouts in 195 innings in the minors the year before), Terry Bongiovanni, Doug Hansen and Bill Olsen, outfielder Rusty Torres, and a trio of infielders – George Zeber, Mario Guerrero and Tim O’Connell.  [One brief footnote to baseball history: one of the players cut to make room for these new prospects was Bobby Cox, who was our Third Baseman for two years.] Loyd had impressed the Yankees during his stint with the Kinston Eagles, the Yankees Carolina League AA team.  He had 125 strikeouts in 120 innings, and a 1.73 ERA.

Going into spring training, there were fifteen guys competing for four open spots on the Yankee pitching staff.  Mel Stottlemyre, Stan Bahnsen and I were expected to be three of the five starters, and Lindy McDaniel, Jack Aker and Steve Hamilton were going to be in the bullpen.  There were six pitchers in contention to be the other starters: Bill Burbach, John Cumberland, Ron Klimkowski, Steve Kline, Joe Verbanic, and this guy named Mike Kekich, who had been traded from the Dodgers.  Also in camp were Rob Grander, Dick Farrell (a veteran National League pitcher who was at the end of his career), Jerry Tirtle, Gary Jones, Terry Ley, Bongiovanni, Gowell, Hansen, Olsen and Colson.  Yankee executives boasted that they had “pitching depth” heading into the 1970 season.  I remember that I was excited.  Entering my third major league season, I pitched the most pre-season innings of the Yankee pitchers and had a 1.55 ERA during spring training.

The four pitchers who made it on the 25-man roster were Burbach, Klimkowski, Verbanic, and Kekich.  Verbanic had missed the entire 1969 season because of a shoulder injury.  He started the season with the Yankees, but was gone in about a month, never to pitch in the major leagues again.  He would eventually be replaced by Cumberland.  Eventually Bile would lose his starting slot to Kline, who got called up in July.

So back to Loyd Colson. Loyd was impressive in spring training and sent to the Manchester Yankees, the AA team, to get some more experience.  He gets called up to the Yankees in September of 1970.  He’s wearing #49 on his back.  I remember his one appearance.  It was September 25, and we were playing the Detroit Tigers in a Friday twi-night doubleheader at Yankee Stadium.  There were six games left in the season, and we were in second place in the American League East, thirteen games behind the Baltimore Orioles.  Steve Kline was pitching against Mickey Lolich.  After seven innings, we were losing 2-1.  Dick McAuliffe had hit a solo homer and Elliot Maddox had an RBI double for Detroit; Ron Hansen hit a solo Home Run for us.  Loyd entered the game in the top of the eighth, taking over for Gary Jones, who had left the game for a pinch hitter.

The first major league hitter Loyd faced was Tigers Second Baseman Dalton Jones, who it a fly ball to center that Bobby Mitchell caught for the first out.  [For Yankee memorabilia collectors there is some significance to this, since Loyd and Bobby would share a Rookie Card in the 1971 TOPPS set.  The next batter was Don Wert, who singled to Bobby in center.  Gene Lamont, the Tigers catcher, then hit an RBI double.  This was a tough debut for a pitcher and I recall being impressed by how Loyd settled down and struck out the next two batters, Maddox and Lolich.

In the top of the ninth, Colson led off the inning by striking out McAuliffe.  He gave up an infield single to Mickey Stanley, and then retired Jim Northrup and the always threatening Norm Cash on flyballs.  The Yankee offense threatened Lolich in the bottom of the ninth. Jim Lyttle hit a one-out single to center, and advanced to second when Gene Michael got on base due to Jones’ error.  So with the tying run at first, The Major sends Roy White in to pinch hit for Loyd.  Lolich struck Heeba out, and then won the game when Horace Clarke flied out to right.

So there it is, the history of Loyd Colson.  Not a bad showing: 3 hits, one run, and three strikeouts (and zero At-Bats) in two innings as a pitcher for the greatest baseball team in history.  He came to Fort Lauderdale in 1971, didn’t make the team, and got sent to Syracuse.  He never had another opportunity to play in the majors, but he did have two good innings in pinstripes and all of us are grateful to him for that.

Monument Monday is a weekly tribute to the Pitchers  I knew during my baseball career.  Click here to read my previous entries.

Fred Talbot came to the Yankees about two months into the 1966 season, when Dan Topping traded Gil Blanco (my old minor league teammate), Roger Repoz and Bill Stafford to the Kansas City Athletics for Talbot and catcher Bill Bryan. I called him Zack – the story about why is in my book.   His Yankee debut came on June 12, 1966 at Tiger Stadium, starting the second game of a Sunday doubleheader against Mickey Lolich.  He had a lead before even taking the mound, after Elston Howard hit a three-run Home Run in the top of the first.  Zack retired the side 1-2-3.  In the second, Clete Boyer hit a leadoff Home Run, and after Lou Clinton flied out, Zack came up to hit for the first time in pinstripes.  He singled to center, and that was it for Lolich, who was replaced by Orlaayndo Pena after just 1 1/3 innings.  Zack went to second on Tom Tresh’s single, and scored on a single by Mickey Mantle.  Let’s push the pause button for a moment: Zack is in pinstripes for the first time, throws a 1-2-3 inning, gets a hit off Mickey Lolich, and scores his first run as a Yankee on an RBI single by Mickey Mantle.  Life is good.  Or maybe in baseball you just have to savor the moment, because things can change quickly.  If there is one thing I know, it’s that.

Zack takes the mound in the bottom of the second with a 6-0 lead.  He gives up a leadoff single to Al Kaline, who moves to second on Fred’s wild pitch and to third on Jim Northrup’s single.  Bill Freehan hits a pop up in foul territory that Elston Howard caught, for one out.  Then Gates Brown hits a single to right, with Kaline scoring the Tigers’ first run and Northrup moving to second.  Zack got a little nervous with Northrup taking a big lead off second, and Larry Napp, the umpire at home plate, called a balk.  Now Detroit had runners on second and third, with one out. But Zack settled down, and got Ray Oyler and pinch hitter Jerry Lumpe out to end the inning.  With one out in the third, he gave up a single to Jake Wood, and then Norm Cash hit a two-run homer.  Now it’s 6-3.  The Yankees added a run in the fourth on Tresh’s Home Run.

The fourth would be it for Zack; Ralph Houk brought in Steve Hamilton to pitch after Brown singled and Oyler walked.  He left his Yankee debut with a 7-3 lead.  The Yankees wound up winning, but not easily.  The final score was 12-10.  For any 20-something year old, standing on the mound with Mickey Mantle is center and Ellie Howard behind the plate is a magical moment, and I’m glad my friend Zack had a strong showing.

Monument Monday is a weekly tribute to the Pitchers  I knew during my baseball career.  Click here to view last week’s tribute to Pedro Ramos.