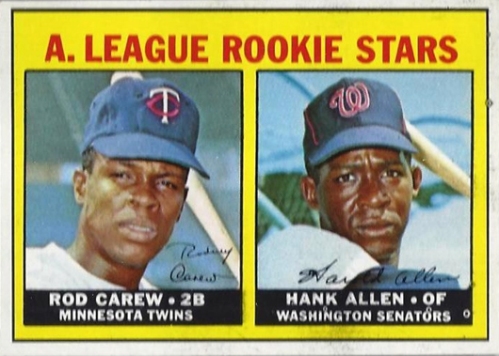 Happy Birthday to Hank Allen, who played for the Senators, Brewers and White Sox from 1966 to 1973.  The Yankees opened the season at D.C. Stadium with President Lyndon Johnson throwing out the first pitch.  Mel Stottlemyre pitched opening day and the Yankees won.  I was the pitcher in the second game, and this was the first time I saw Dick Allen’s little brother.  The problem for me was that I didn’t make it to his At-Bat.  I gave up an RBI triple to Frank Howard in the first, and had a much worse second inning.  I have up five runs and Jim Bouton came in to replace me.  I had to wait until August 27, when the Yankees returned to Washington, to actually throw a pitch to Hank.  It was the bottom of the first with two outs and runners on second and third; he grounded out to Charley Smith at third to end the inning.  After getting a leadoff walk against me in the fourth, he flew out to Roy White in right in the sixth and I struck him out in the eighth.  The Yankees won 8-2.  Hank had a lifetime .269 average against me; that was higher than his brother, Dick, whose career average was .250 off my pitching.  I never faced the third Allen brother, Ron, who played only in the National League.

As long as people were willing to listen to me talk about my one career Triple 47 years ago today, I figured I could relay another memorable hit by one of my favorite pitchers: Sparky Lyle’s only extra base hit as a New York Yankee.  It was June 3, 1972, a Saturday afternoon in Chicago.  Freddy Beene started the game against Stan Bahnsen.  We were down two runs going in to the top of the ninth, and Goose Gossage was on the mound as the White Sox closer.  We tied the game, 10-10, after a single by Rusty Torres, a walk by Bobby Murcer, and singles by Roy White and Ron Blomberg.  Goose, in a rare blown save, was gone after three batters. The Countess came in to pitch the bottom of the ninth and had a 1-2-3 inning.  He did the same thing in the tenth and eleventh innings.  He gave up one hit in the twelfth, but Pat Kelly got stranded.

Bobby Murcer led off the top of the thirteenth with a single of Bart Johnson and advanced to second on Roy White’s walk.  Bloomie hit a shot to Carlos May in left, but it wasn’t deep enough for Lemon to score.  Then Thurman Munson hit a three-run Home Run.  Jerry Kenney hit a grounder to short, but was safe at first because of Rich Morales’ throwing error.  The second out of the inning came when Bernie Allen flew out to left.

So now the Yankees are up 13-10 and with two outs Ralph Houk kept Sparky in the game.  He hit a double that went between Carlos and Jay Johnstone in center, scoring Kenney. He made it to second huffing and puffing, unaccustomed to running to first yet alone an extra base, but that huge smile, sort of like Tweetie Bird looking at Sylvester, is what I remember most. But that wasn’t the best part.  Horace Clarke came up to bat and hit a single to center off the first pitch, and The Countess had to run from second to home. He made it, huffing and puffing again – this time I saw no smile.  What I would give to watch him do that again!

Apparently unsatisfied with a five-run lead, the Yankee offense continued to rally.  Rusty walked and Bobby Murcer hit a three-run Home Run.  We went into the bottom of the thirteenth leading the White Sox, 18-10.

The Countess, maybe still a little tired from all that running, scared all of us just a little bit. He gave up a leadoff walk to Dick Allen, who moved to second off Jay’s groundout and to third on Bill Melton’s single.  Chuck Brinkman, pinch hitting for the pitcher, singled to left, but Dick couldn’t score off Heeba.  So Sparky had the bases loaded, one out, and I think he was still out of breath from all that running.  But it was over quickly: Tom Egan hit into a double play.  Sparky Lyle was the best! 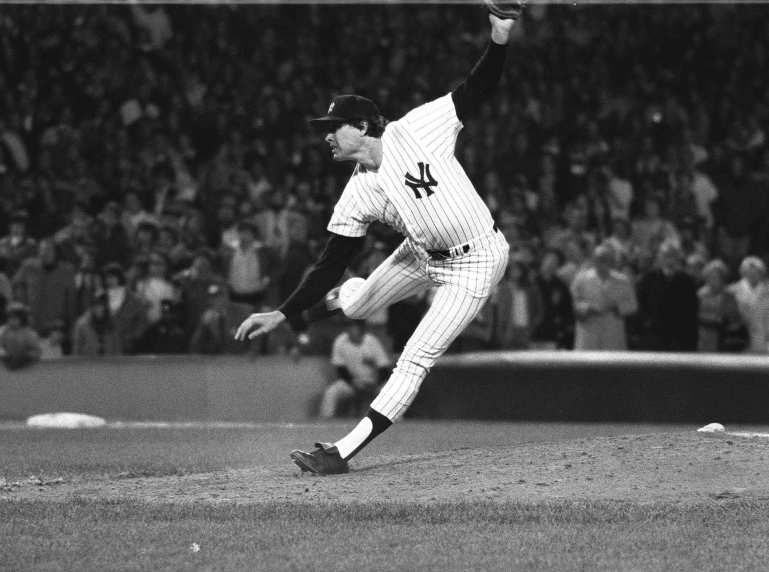 Happy Birthday to Hall of Famer Goose Gossage, one of the greatest closers in the history of baseball.  I never got to play with Goose on the Yankees, and as a starting pitcher that was my loss.  No disrespect to Lindy McDaniel, but history would be treating me just a little better if I had Goose on my side.  The guy was incredible.  Goose’s rookie year was Sparky Lyle’s first in pinstripes.  They went up against each other on two consecutive days.

Goose’s first game against the Yankees was during his rookie season of 1972.  The Yankees were in Chicago and this was the first time Goose was facing us. The date was June 3, 1972.   It started as a matchup between Stan Bahnsen, who had been dealt to Chicago in that crappy-for-us Rich McKinney deal, and Freddie Beene.   This was one of the highest scoring games I can remember – we won 18-10.  Goose entered the game at the start of the seventh, and the Yankees were losing 10-8.  He was impressive – a 1-2-3 inning, getting Ron Bloomberg, Thurman Munson and Jerry Kenney out.  And he was just as impressive in the eighth, getting Bernie Allen, Felipe Alou and Horace Clarke out – another 1-2-3 inning.

So Goose comes out for the top of the ninth, protecting a 10-8 lead.  He gave up singles to the first three batters: Rusty Torres, Bobby Murcer and Roy White, who drove in Rusty.  10-9, runners at first and second, no outs, and Bloomie is up.  Chuck Tanner pulled Goose for Steve Kealy, who gave up an RBI single.   The score remained tied until the top of the 13th, when the Yankees had an extraordinary inning:  Thurman Munson and Bobby Murcer both hit a three-run homers: The other RBI’s came from two unlikely sources: Horace Clarke and Sparky, who drove in a run with a beautiful double to left.  Sparky pitched five innings, holding the Chisox to just three hits for the win.

The next day, Goose came in to relieve Dave Lemonds in the sixth inning.  The White Sox were ahead 2-1, but Lemonds got in some trouble.  With runners on first and second, Roy White hit an RBI single to tie the game.  Tanner pulled Lemonds and Goose got Felipe to hit into a double play.  But with Bobby on third, Goose threw a wild pitch and the Yankees were now up 3-2.  In the seventh, Goose faced an unusual offensive threat: Hal Lanier, who singled to right, stole second, and go to third of another wild pitch.  Then Gene Michael laid down an absolutely beautiful bunt and Hal scored.

The White Sox came up in the bottom of the ninth, and the Yankees starter – some guy named Kekich – was three outs away from a complete game.  With one out, he walked Bill Melton and then gave up a hit to Mike Andrews.  With runners on first and second, Ralph Houk pulled Mike and brought in Sparky to close.  Then Tanner put Jorge Orta in to run for Andrews, and pulled the next batter, shortstop Rich Morales, for a pinch hitter, Dick Allen.  Allen belted a Home Run over the left field fence.  The White Sox won, 5-3, and another rookie, Cy Acosta, got the win.