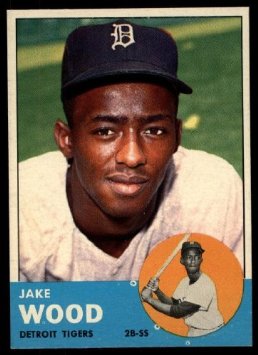 Happy Birthday to former Detroit Tigers infielder Jake Wood.  I faced Jake for the first time during my rookie season, and I remember the game well – mostly because of how badly it started.  It was June 11, 1966 and it was my second time pitching in Tiger Stadium.  (Let me start by saying that the first time was a disaster.  I gave up four runs in six innings and lost the game to Denny McClain.)  Before I even took the mound, my teammates came through.  Tom Tresh led off with a walk and stole second on Bill Freehan – and that was no easy task.  Bobby Richardson signed, moving Tresh to third.  Tresh scored on a Roger Maris groundout, and Richardson scored on Joe Pepitone’s single to center.  The lead narrowed quickly.  After I walked the leadoff batter, Don Wert, I faced Jake Wood and hit him with the pitch.  Don Demeter drove him home with a single.  I struck Wood out in the third, a 1-2-3 inning for us.  The Tigers tied it up in the fifth with a Dick McAuliffe leadoff Home Run.  Wert singled, and Wood bunted to third moving Wert to second.  Luckily Norm Cash, who could be frightening at the plate, grounded out.  My lead increased when Elston Howard hit a two-run Home Run.  Don Demeter hit a one-out homer in the sixth and Ralph Houk too me out.  The Yankees won, 6-3, thanks to some outstanding relief pitching from Hal Reniff, and I got the win.